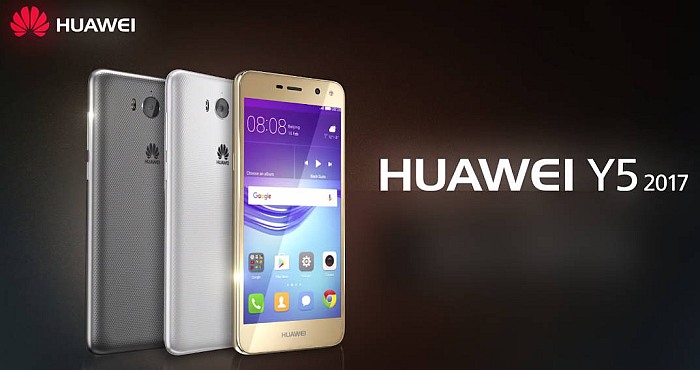 Huawei launched an entry level smartphone, Huawei Y5 2017. This phone comes with 5 inch HD display with 1280 x 720 pixels resolution. You will get 5 color variants in Y5 2017 which is pink, blue, white, gold and gray.

There will be an 8-megapixel rear camera with dual flash and f/2.0 aperture. The front-facing camera is 5 megapixel with a Wide Angle lens of 84 degrees. In terms of processor, you will get MT6737T  Quad Core processor which is clocked at 1.4 gigahertz. You will get an internal memory of 16 GB and it comes with 2 GB of RAM. You can expand storage up to 128 GB through a micro SD card.

You will get a pack of 3000 mAh battery in Huawei Y5 2017 and Huawei claims that the battery will run up to 1.5 days on the one-time charge. The reason for this is that Huawei used a Smart power saving technology in this Smartphone. But here Android Nougat Is not used, you will get Android 6.0 Marshmallow with Huawei EMUI 4.1.

This smartphone supports Glonass, GPS, and AGPS. You will get sensors such as Accelerometer, proximity, ambient light sensor, compass and unfortunately you are not getting a fingerprint sensor. Huawei Y5 2017 includes connectivity options such as Bluetooth 4.0 + Wi-Fi 802.11 b/g/n, 2.4 GHz. The dimensions of the smartphone are 143.8 x 72 x 8.35 mm and its weight is 150 grams.

In February, Huawei launched P10 and P10 plus in Mobile World Congress which comes with the setup of dual rear Camera. There are a lot of similarities between Huawei P10 and P10 plus, the only differences are of battery size, display, and storage.

Huawei also going to put its hand on AI assistant system by launching its own voice assistant soon in China which is their home market, according to Bloomberg. Huawei hired a team of around hundred engineers in its Shenzhen Office which is working on its voice assistant.

A lot of mid-range market in China and Asia is covered by Xiaomi and Huawei wants to tight its all roots in the Asian market. Xiaomi and other Chinese company such as Vivo, Oppo are giving competition to Huawei. This Y5 2017 is a good phone launched by Huawei for low budget lovers.

This website uses cookies to improve your experience while you navigate through the website. Out of these, the cookies that are categorized as necessary are stored on your browser as they are essential for the working of basic functionalities of the website. We also use third-party cookies that help us analyze and understand how you use this website. These cookies will be stored in your browser only with your consent. You also have the option to opt-out of these cookies. But opting out of some of these cookies may affect your browsing experience.
Necessary Always Enabled

Any cookies that may not be particularly necessary for the website to function and is used specifically to collect user personal data via analytics, ads, other embedded contents are termed as non-necessary cookies. It is mandatory to procure user consent prior to running these cookies on your website.